What Is User Role In WordPress?

In WordPress terminology, a user role term describes what a particular user can do and cannot do on your WordPress site. In other words, user roles define the access level or permissions of a person authorized which is invited by an administrator to use a WordPress.com site.

A user role determines permissions for users for performing various tasks. There are some predefined roles as users with a predefined set of permissions in a default WordPress installation. These roles are:-

As far as the default roles are concerned the Super Admin has the highest level of access while the subscriber has the least. The subscriber role only allows the user to read posts but not write anything.

The Contributor can write posts but not publish them.

In fact, from default roles, the Super Admin has more power in comparison to other roles. They have entire site access and available only on a multi-site network. While the subscriber has the minimum.

However, the subscriber role allows only to change their profile and view the site dashboard. Except this, they cannot do anything on a site. When it comes to administrators, they not only handle the site but they also have the capability to manage who can access to a particular site in a network.

The good thing is that by using a plugin you can add and remove new roles as a user. It allows the website administrator:

Reducing the capabilities of some roles allow the WordPress website administrators to have other users participate on their site. The user roles make it available for WordPress websites to have multiple authors and thousands of registered users.

This stretchability has changed WordPress from a simple blog platform to a community platform. And nowadays it has the capability to power membership sites, large online publications site and many other types of sites that would basically need a lot of users.

How to create your own user roles in WordPress

You create your own user roles by using the capability manager enhanced plugin. 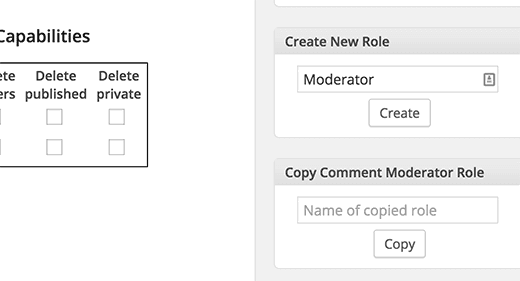